Enjoy a performance at the home of the Bradford Little Theatre on 18 Welch Avenue in Bradford, Pennsylvania. Friday & Saturday shows begin at 7:30 pm and Sunday shows begin at 2:00 pm. Tickets to each show are $10 for adults or $8 for students/seniors.

A Christmas Carol A Live Radio Production – December 7-9, 2018
Enjoy a fun twist on this Holiday Classic. The production will be staged as a live-action radio production. A handful of actors bring dozens of characters to the stage, as a familiar story unfolds: Three ghosts take Ebenezer Scrooge on a thrilling journey to teach him the true meaning of Christmas. 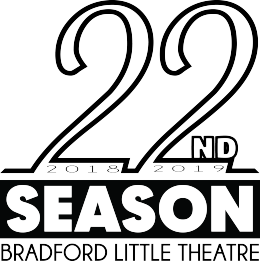 The (Almost) Totally True Story of Hasel & Gretel – January 25-27, 2019
It should be a piece of cake for a fairy godmother to tell the story of Snow White but her wand is bent and things aren’t going quite as they should. Then, to make things worse, she’s interrupted a couple of policemen who are hot on the trail of two very devious and dangerous criminals. Their names? Hansel and Gretel!

Nuts by Tom Topor – March 22-24, 2019
The court drama will have you rooting for the good guys and hating the bad guys. Set in a courtroom in New York’s Bellevue Hospital, the stay follows a high-priced call girl incarcerated on a charge for killing a violent “john.” The State, represented by a court-appointed a psychiatrist and an aggressive prosecutor, say Claudia Faith Draper is unfit to stand trial. Can she prove to the judge that she isn’t nuts?

Mourning Has Broken – May 17-19, 2019
In this dark comedy, six friends reunite at three funerals. As they try to keep their spirits up and their circle together, they find out more about each other (and themselves). With hilarious one-liners and an ensemble of characters that play off each other’s rhetoric flawlessly, the writing in this play deserves a standing ovation.

With so many outdoor options to choose from in any season, the Allegheny National Forest region offers many exciting recreational activities for your next getaway visit.
Birding Boating Camping Fishing Golf Hunting Ice Skating Skiing Snowmobiling

Safety measures of CDC guidelines & PA COVID-19 safety mandates are in place to aid you in traveling safely. Masks are mandatory, as is maintaining 6 feet of social distancing. Many businesses have been impacted by this pandemic, please call ahead to check for changes at your destination before traveling.

So Much to See and Do in Any Season

Accommodations for Every Budget & Lifestyle

It’s time to leave the city behind and get back to nature. Located between the Allegheny National Forest of Pennsylvania and Allegany State Park in New York, McKean County, Pennsylvania is Trail Central! Miles and miles of trails offer a relaxing and fun way to get away from it all in any season.
ATV Biking Collectible Pins Cross-Country Skiing Equestrian Explore Heritage Hiking Scenic Drives Water

Visit the many Quaint Villages and Small Towns in the Forest region. Each offers something unique for you to enjoy.